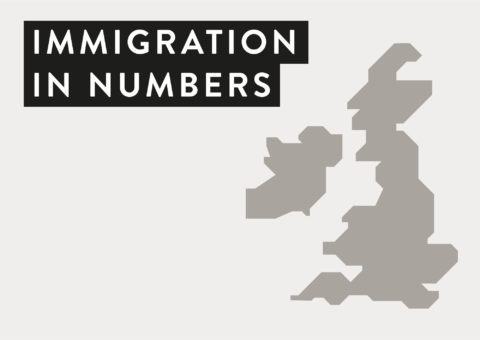 New figures published by the Office for National Statistics (ONS) show that UK net migration hit 504,000 in the year ending June 2022, the highest level on record.

An estimated 504,000 more people came to the UK than left last year, according to figures published by the Office for National Statistics (ONS) for the year ending June 2022.

This is the highest net migration figure ever recorded, and an increase of 331,000 compared to the previous year. Net migration is the difference calculated between the numbers of people entering and leaving the UK.

The ONS said that the record figure was due to an unprecedented combination of events which have all contributed towards relatively high levels of total long-term immigration at an estimated 1.1 million in the year to June 2022.

Jay Lindop, Director of the Centre for International Migration at the ONS said: “A series of world events have impacted international migration patterns in the 12 months to June 2022. Taken together these were unprecedented. These include the end of lockdown restrictions in the UK, the first full period following transition from the EU, the war in Ukraine, the resettlement of Afghans and the new visa route for Hong Kong British nationals (Overseas), which have all contributed to the record levels of long-term immigration we have seen.”

Migration from non-EU countries, specifically students, is driving this rise. With the lifting of travel restrictions in 2021, more students arrived in the UK after studying remotely during the coronavirus pandemic. However, there has also been a large increase in the number of people migrating for a range of other reasons. This includes people arriving for humanitarian protections, such as those coming from Ukraine, as well as for family reasons.”

These many factors independent of each other contributing to migration at this time mean it is too early to say whether this picture will be sustained.”

Last week, the Home Office also published its latest quarterly migration statistics covering the period up to the end of September 2022. Below, we set out some of the headline points from this latest set of statistics.

Arrivals in the UK

There were an estimated 95.9 million passenger arrivals from outside the Common Travel Area (CTA) in the year ending September 2022 (including returning UK residents). This was more than 4 times as many as in 2021 (21 million) when COVID-19 travel restrictions were still in place. However, this latest number is only around two thirds of the total number of new arrivals in 2019 (146.3 million), the period immediately before the coronavirus outbreak.

There were 2,610,024 visas granted in the year ending September 2022, 18% fewer than the calendar year 2019, primarily due to 1.2 million fewer grants of Visitor visas, although the total number of grants continues to increase in the aftermath of the pandemic.

Of the visas granted in the latest 12 months:

Ukrainians in the UK

In response to the Russian invasion of Ukraine, the UK government launched new visa routes this year for Ukrainian nationals forced to flee their homes. By 30 September 2022, the number of applications to each scheme were as follows:

‘Worker’ visas (the main category for skilled work) granted to main applicants increased by 128% compared with 2019. These increases are largely due to the Skilled Worker and Health and Care Worker visas which were launched in December 2020.

The most common nationalities granted sponsored study visas were as follows:

Almost three quarters (73%) of family-related visas granted in the year ending September 2022 were to partners, with the remainder being for children or other dependants.