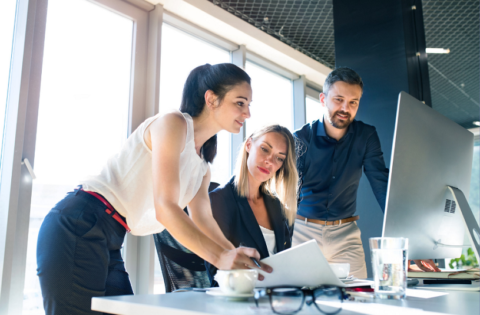 New research commissioned by the Home Office and published on 15 July provides early insights into the experiences of migrant workers and employers using the UK’s Skilled Worker route.

Launched in December 2020, the Skilled Worker route has replaced the Tier 2 (General) route for overseas nationals coming to or staying in the UK to do an eligible job with an approved employer.

The research examines the decision-making process for workers who have migrated to the UK on a Skilled Worker visa, and for employers who have used the route to recruit migrant workers from overseas. The research consisted of two parts:

Below, we summarise the main findings from the perspectives of the migrant workers and sponsors surveyed.

How do Skilled Workers decide to migrate to the UK?

The most important factors for skilled workers when considering working and living in the UK were not visa-related. Instead, most of the sample cited familiarity with the English language (92%), opportunities for career progression (92%) and a professional fit to job roles (88%) as the key factors influencing their decision.

For over half (54%), the Skilled Worker visa route itself influenced the decision to work in the UK, mainly thanks to the ability to extend the visa and the ability to settle with dependants. When asked about their future intentions, most (70%) Skilled Workers surveyed planned to extend their stay in the UK beyond the duration of their current visa.

When asked about their experiences of the visa application process, the sample reported high levels of satisfaction with the overall process, with 92% responding “very satisfied” or “fairly satisfied”. Two-thirds of respondents (66%) received help to complete the visa application form, mostly from their sponsor or from a lawyer, immigration advisor or representative. Most of those surveyed agreed that the application process and guidance provided were good; however, there is room for improvement in the length of time required to submit and receive a decision.

Skilled Workers from the survey sample gave the following explanations for choosing the Skilled Worker route to migrate to the UK:

“I liked the opportunity and the experience I would get here. Also, I could stay longer term on the Skilled Worker visa. It helped me decide to move here.”
(Skilled Worker visa holder from Pakistan, 2425 – Actuary, economist or statistician)

“It made me more picky and particular about my job because the Skilled Worker visa does not allow me to change jobs; I had to make sure the job worked out for me.”
(Skilled Worker visa holder from India, 2136 – Programmer or software development professional)

How do employers decide to sponsor Skilled Workers?

From the survey, the main reasons why employers recruited migrants under the Skilled Worker route were the need for specialist skills (76%) and a shortage of UK-based workers with the relevant skills or experience needed (64%). These two reasons were mentioned together in most cases.

Around four in ten employers surveyed felt that changes in sponsorship policy have made it easier to recruit skilled migrant workers. This increases to roughly six in ten for employers who already held a sponsorship licence before December 2020. Half of all employers surveyed stated that changes to sponsorship policy had influenced their decision to sponsor a skilled migrant worker. The removal of the Resident Labour Market Test (RLMT) had the biggest influence upon the decision to sponsor, followed by expansion of skills threshold.

Roughly three in four employers surveyed had provided some form of help to the skilled migrant worker they had sponsored. Most commonly stated were helping the applicant understand eligibility criteria, paying the full application fee and helping to gather supporting evidence for the application.

When asked about future intentions for vacancies and sponsorship, all sponsors surveyed said they expected to hire new employees in the next 3 to 6 months. Of those vacancies, a large majority (78%) will be eligible for sponsorship via the Skilled Worker route. The most likely method employers will use to fill these future vacancies is to hire a UK worker, followed by sponsoring an applicant for the Skilled Worker visa route. The reasons employers gave for hiring a UK worker relate to speed, administrative burden and cultural fit, while for sponsoring skilled workers, the reasons relate to skills and a lack of UK applicants.

When invited to comment on their decision to sponsor migrant workers under the Skilled Worker route in particular, respondents said:

“Before Covid I didn’t need to sponsor because the workforce was there. But now the workforce is not there. So, something must be done, and the licence was the only way to entice people to work for me.”
(Micro-sized sponsor, Accommodation and food service activities)

“Because of continuity. They are on a 3-year visa so they will stay with us and can build a relationship with the patients.”
(Small-sized sponsor, Human health and social work activities)

The researchers also offered employer sponsors the opportunity to provide any final reflections and they gave both positive and critical feedback in equal measures:

“It’s been a good thing from the Government. They don’t always get it right, but this time they deserve praise for the ease and success of the skilled migrant workers visa.”
(Small-sized sponsor, Other service activities)

“The speed needs to be quicker as this takes at least 2 months and is very complicated. If someone leaves my business I need someone within 2 weeks.”
(Small-sized sponsor, Accommodation and food service activities)

If your business intends to recruit migrant workers under the Skilled Worker route, Smith Stone Walters can help. Our dedicated sponsor licensing team can assist with all areas of sponsorship, from initial licence application to ongoing compliance and auditing services.

To speak to an immigration advisor about your specific requirements, please contact us today.