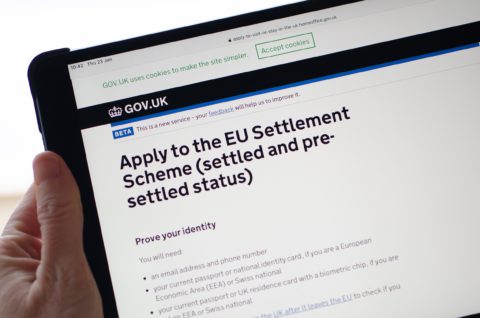 The latest Home Office statistics show that there have been over 5 million applications to the EU Settlement Scheme to date, with two months remaining until the 30 June 2021 deadline.

European nationals who wish to secure settled or pre-settled status in the UK have until 30 June 2021 to apply under the EU Settlement Scheme.

The EU Settlement Scheme is designed to help European citizens to secure their rights to continue living and working in the UK post-Brexit. EU, EEA and Swiss citizens who were living in the UK by 31 December 2020 are eligible to apply under the scheme, and successful applicants will be granted either settled or pre-settled status, depending on how long they have been living in the UK.

With just two months remaining until the deadline, the number of applications received to date has already far exceeded the 3 million applications initially predicted by the Home Office when the scheme opened in March 2019.

The numbers so far

The latest Home Office statistics published on 15 April 2021 show that:

Of the concluded applications, the outcomes were as follows:

How to apply to the EU Settlement Scheme

EU citizens who were living in the UK before the Brexit transition period ended on 31 December 2021 and who have not yet applied to the EU Settlement Scheme are strongly advised to do so before the 30 June deadline.

Applications to the EU Settlement Scheme are free of charge and can be submitted using a device such as a laptop or smartphone. To assist those applying, Smith Stone Walters has created a handy video guide, which explains the application process step by step.

After you have submitted your application to the EU Settlement Scheme, you will receive a letter from the Home Office confirming the outcome of your application. You will not usually get a physical document to prove your settled or pre-settled status, but you can view and prove your immigration status online.

After 30 June 2021, EU citizens will no longer be able to use their passport or National Identity Card to demonstrate their right to work in the UK, and employers will need to use the Home Office’s online tool to check the immigration status of prospective European employees.

Despite a multi-million pound advertising campaign and dedicated funding to support vulnerable and hard to reach groups, critics suggest that the Home Office still has no clear idea of how many eligible Europeans have still not applied and risk slipping through the net.

Smith Stone Walters advises employers to take the time now to conduct an audit of your existing European workers and ensure they are aware of the requirement to apply by 30 June if they have not already done so.

Support with your settlement application

If you require support with filing an application to the EU Settlement Scheme, Smith Stone Walters can help.

Contact us today to speak to one of our expert immigration advisors.