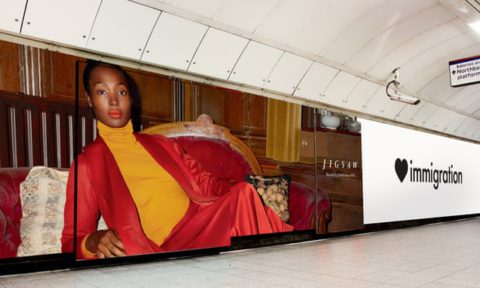 Retailer Jigsaw promoted its ‘love immigration’ campaign on the London underground in 2017.

Fashion wears its immigration
heart on its sleeve

The Home Office’s latest Statement of Changes to the immigration rules contains a section on fashion. The amendments allow not just established celebrities or commercial models, but ‘new faces’ to work in the UK if they can prove evidence of their ‘considerable promise’ and ‘real potential’.  It’s a recognition of how important fashion is to the UK economy  – and a reminder that it has been created, and relies heavily, on immigration.

There are more than 500,000 people in the UK currently employed in clothes retail and manufacturing. After the referendum in 2016, there were fears that Brexit would hinder the industry’s ability to be competitive internationally. Retailer Jigsaw, whose staff come from 45 countries, introduced a ‘love immigration’ poster campaign in 2017.

The story is different in the US, where foreign-born citizens and their descendants who have been successful in the world of fashion are seen to have followed the American Dream. From Levi Strauss in the 1850s, through to Ralph Lauren,  Jimmy Choo, Vera Wang and Diane Von Furstenberg, these global brands trade on their origins in other countries.

Companies like FarFetch, founded in Portugal, and Net-a-Porter, created by an American, thrive in Britain and particularly London, because of the capital’s reputation as a diverse and skilled fashion destination. Luxury British brand Burberry recently appointed two Italians in senior management roles, one of whom joined the company in 1990 as a student.

‘It is difficult to think of an industry that has been more affected by immigration. The Jews from Russia and eastern Europe in the early 20th century, the Italians, Turks and Cypriots in the middle of the century, and the Indians and Pakistanis later on have been key drivers of fashion in the UK. They brought with them artisan skills and experience.’

Last September, the most important month in the fashion calendar, Prime Minister Theresa May announced plans to invest £150 million into Britain’s creative industries.

At a Downing Street reception, the PM, who has publicly worn outfits from home-grown designers like Amanda Wakeley, Anya Hindmarsh and Vivienne Westwood, said:

‘Get the message out there of the British fashion industry, of the people behind the scenes, of the billions of pounds in revenue and how valuable fashion is to the economy.’

Over the next four years, clothing is predicted to be the third fastest growing sector in the UK after health and beauty, and food and grocery. The online fashion market is forecast to grow 55.3 per cent by 2022.

Fashion is considered to be a relatively recession-proof market. While consumers prioritise basics over luxuries during periods of hardship, they stay interested in their appearance and trends – and continue to buy clothes and accessories that boost the finances of the country, not just its looks.