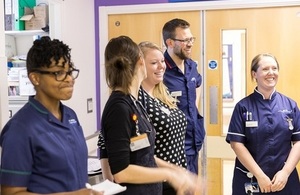 NHS England is short of 9,337 doctors, with two out of five GPs warning they intend to leave their jobs within the next five years.

Health Secretary Matt Hancock has admitted that the NHS can’t cope without the help of foreign doctors and nurses.

Three years ago, it was estimated that one in four nurses had to be recruited from abroad. Now, NHS England says it is short of 9,337 doctors, with two out of five GPs warning they intend to leave their jobs within the next five years.

Hancock is set to suggest later this month in his long-term plan for the NHS that more doctors should be allowed into the country via the medical training initiative (MTI).

This scheme permits 1,500 non-EU doctors a year to work in Britain. It is classified as an exchange programme, as those participating spend two years learning from an NHS consultant, before returning to their home countries, where they can use their increased expertise.

As a result, those on the MTI are not counted in any immigration targets. The Minister is reported to be hoping to double the number to as many as 3,000.

‘This government welcomes the role of the MTI in allowing overseas medical staff the chance to train in the UK, observe clinical practice and to learn vital skills. While they are training in the UK, these international doctors gain state-of-the art skills and experience, which they can take back and use to benefit healthcare globally.

‘We are absolutely clear that these roles are not designed to fill substantive vacancies, but offer a valuable training opportunity for doctors from overseas. As with the other government authorised exchange schemes, the MTI scheme is subject to regular review to ensure it continues to meet its aims and those of the immigration system.’

Hancock has also suggested that the NHS should run more like fast-food chain McDonald’s in terms of its leadership training. He has also given his support to a newspaper’s celebrity-backed campaign to encourage more people to volunteer for the NHS.

‘I want volunteering to be the norm across every NHS hospital, with volunteers given the tools they need to fit seamlessly into the organisations they are giving up their time to support, so that the public and clinicians can work side by side to deliver the best possible care to patients.’

The NHS already receives help from an estimated 78,000 volunteers. They play a vital role in providing company for patients and doing tasks like making tea or collecting medication. This frees up the doctors and nurses to provide clinical care. However, while volunteers are appreciated, there is concern that this situation is unsustainable and no substitute for employing experienced staff.

Research conducted for two charities, the Royal Voluntary Service (RVS) and Helpforce, found that a lack of clarity about what hospital volunteers should or shouldn’t do ‘could lead to tension‘.