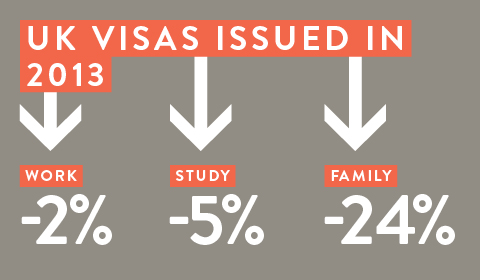 The government has recently published the latest set of UK immigration statics relating to the year ending June 2013.

The government has recently published the latest set of UK immigration statics relating to the year ending June 2013. During this period, the total number of (pre-entry) visas issued fell 4% on the previous year to 501,840. This figure excludes visas issued to visitors or passengers transiting the UK.

The statistics relating to the key routes of entry are detailed below:

After the closure of the Tier 1 General and Tier 1 Post Study categories, the number of work visas issued fell 2% to 144,554. Within this figure, sponsored Tier 2 visa holders accounted for 43,485. The majority of those 43,485 certificates used related to migrant workers either entering the Information and Communication sector (18,304) or carrying out a Professional, Scientific or Technical role (7,668). Those overseas nationals entering the UK to work within the Financial and Insurance sector amounted to 5,551.

In contrast, the number of work-related extensions increased by 9% to 145,855 in the last year. This is largely explained by the high number of skilled workers (Tier 2) present in the United Kingdom who had already received the initial approval to remain for up to 3 years, and then sought to extend their stay in order to continue in their role.

There was a decrease of 24% for family-related visas issued (totalling 34,201) during the year.

In the year ending December 2005, 17% of all family-related visas were refused. That percentage increased to 22% in the year ending September 2012. Since then, the number refused leapt to 38% in the year ending June 2013. This marked increase coincides with stricter changes made to the Family Immigration Rules, which apply to applications made on or after 9 July 2012.